I'm excited to announce the release of book 3 of the storm series.
Available February 28th on Amazon! 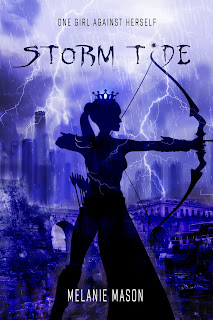 Eridales actions saving her sister have thrust the empire into chaos. To make things worse, Eridale thinks she's going crazy when she starts hearing her dead mentor's voice in her head.
Treachery strikes unexpectedly and suddenly Eridale is running for her life, but who can she trust? Is someone in the empire trying to remove her from the the throne, or are the rebels taking a stand to eliminate the imperial family permanently?
Eridale must come to terms with who she is and decide if she's willing to fight for a broken empire. Her decision will bring her face to face with an unexpected enemy, someone who could destroy everything, including Eridale's will to fight.
Brought to you by Melanie Mason Author at 8:07 PM No comments:
Newer Posts Older Posts Home
Subscribe to: Posts (Atom)