Winners for my 3 Book Giveaway!!!

Congratulations!!! Thank you for participating!!!!

Brought to you by Melanie Mason Author at 11:02 AM No comments:

This is a fantastic middle grade series by a great author. I just finished reading the last book a few days ago and it was a great ending to a fun, exciting series.
The Emerald Ring:
Sara Bogus’s life turns upside down when she discovers an emerald ring that once belonged to Cleopatra. The fun of discovering the ring’s unique abilities turns to fear when she finds out a dangerous cult bent on restoring Rome to power is after the ring. Forced to choose between keeping the ring and saving her friends, Sara learns the price of bravery in this electrifying read!
The Ruby Pendant:
Welcome to New Orleans- home of Mardi Gras, jazz music and voodoo. Eighth grader Melanie Belaforte is home for Spring break and itching for excitement. Late one night she discovers a hidden chamber and a secret journal in her deceased Aunt Florence’s bedroom.
The diary contains the writings of a mad woman, along with vague clues to the whereabouts of a ruby necklace that once belonged to Cleopatra. The ruby bestows upon the wearer the power to hear other people’s thoughts- even the thoughts of the dead!
And so the hunt begins. Melanie, her best friend Sybil, and a haunting specter unravel clues that take them from crumbling graveyards, to the busy streets of the French Quarter, and then into murky swamps, all to find the prize. But they need to watch out, because a murderous cult is matching them step for step, and they won’t give up, ever.
The Diamond Looking Glass:
The world knows it as a cartoon with dancing teacups and broomsticks. To twelve year old Claire La Fleur, it is family history, and the power behind Belle’s mirror is real. Every ten years her family gathers to see if the mirror will awaken, and for the last two hundred years it has slept.
This time, Claire’s touch awakens the magic within the diamond looking glass, a direct portal to the past and a way to communicate with Cleopatra, the last pharaoh of Egypt. The lure of power brings with it many perils, and a betrayal close to home thrusts Claire into a treacherous underworld. To protect the mirror, she travels into the Louvre museum in the dark of night, searches abandoned subway tunnels, and walks the catacombs of the dead.
Welcome to Paris, France – where danger follows in every step.
The Sapphire Blade:
The final journey begins!
Travel with past heroes and a new adventurer to the historical romps of London and the scorching sands of Alexandria. Fourteen-year-old Akmir, raised from birth to sacrifice everything in the pursuit of Cleopatra’s magic gemstones, holds within his hands the secret location of the fifth and final mystic gem: the blue sapphire.
His quest leads him to England, where four other gemstone searchers: Sara, Melanie, Kainu and Claire, are on the hunt. A pawn of the Roman Brotherhood, Akmir must choose his own path, whether to follow in his father’s brutal footsteps or stay true to his mother’s Egyptian heritage. Clues, puzzles, and danger rule the day.
What will happen when the power of all five gemstones are brought together? This is a battle for life and death, and only one side can win.
I loved all four books and highly recommend them to any kids who loves and adventure and any adult who wants to join them.

The Guise of a Gentleman by Donna Hatch

The Guise of a Gentleman: Regency Historical Romance (Rogue Hearts Series Book 2):
The widowed Elise is a perfect English lady living within the confines of society for the sake of her impressionable young son. Her quiet world is shattered when she meets the impulsive and scandalous Jared Amesbury. His roguish charm awakens her yearning for adventure. But his irrepressible grin and sea-green eyes hide a secret.
A gentleman by day, a pirate by night, Jared must complete one last assignment from the Secret Service before he can be truly free. Elise gives him hope that he, too, can find love and belonging. His hopes are crushed when his best laid plans go awry and Elise is dragged into his world of violence and deceit. She may not survive the revelation of Jared’s past…or still love him when the truth is revealed.
I thoroughly enjoyed this story. It was full of passion, intrigue, mystery, and suspense and best of all it was CLEAN!!! Don’t get me wrong there is some serious sizzling romantic tension between the characters, but it is tastefully done. I love Hatch’s writing style.
I’m literally swooning every time Jared puts his arms around Elise. This was a delightful, clean, and awesome Regency romance with a good thick layer of intrigue and suspense. I could hardly put it down and finished it in one evening and morning.
The story has many twists and turns that keep you wondering what will happen next, but none of it is too crazy to fit in.
I loved how Elise is a strong character, but she also realizes that her life can use change and the wonderful power of being needed and desired. Every woman wants to feel needed and desired.
Jared is a man full of mystery and we long to know all his secrets, but we also long to know the man beneath all the facades. It was beautiful to see how the characters affected each other and how despite their best and worst selves they learned the power and strength of love.
I highly recommend this series to anyone who wants a fantastic, clean, Regency romance. Be prepared for a good deal of intrigue to carry you along as well!!! I’m ready to read some more from Donna Hatch!!!
Brought to you by Melanie Mason Author at 2:35 PM No comments:

Book Signing coming up in December!!! 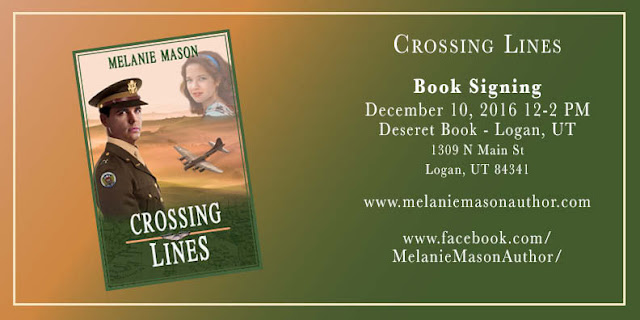 Brought to you by Melanie Mason Author at 3:02 PM No comments:

Book Signing coming up in December!!!

Brought to you by Melanie Mason Author at 3:02 PM No comments:
Newer Posts Older Posts Home
Subscribe to: Posts (Atom)