I have the wonderful opportunity to participate in a book signing during Midnight Madness at The Book Table.

Look for me on Friday, December 4th, starting at 8pm.

Brought to you by Melanie Mason Author at 11:49 AM No comments:

So I have discovered, for me anyway, this amazing author. She writes historical romances that are clean and sweet. I have enjoyed the two that I've read so far and I'm looking forward to more. Can I just say that I absolutely love the library system!!!

Susanna Smith has grown up with everything she’s ever wanted, except one thing: an education.
Because she’s a woman, higher learning was always closed to Susanna Smith. But her quick mind and quicker tongue never back down from a challenge. And she’s determined to marry well, so she’ll be able to continue her work with the less fortunate.
Growing up with little to his name, poor country lawyer Benjamin Ross dreams of impacting the world for the better. When introduced to the Smiths he’s taken by Susanna’s intelligence and independent spirit, but her parents refuse to see him as a suitor for their daughter.
I loved this story from beginning to end. It had romance, adventure, and beautiful telling of those pre-revolution times. Headlined has done a great job pulling us into this time period.

Due to her parents’ promise at her birth, Lady Rosemarie has been prepared to become a nun on the day she turns eighteen. Then, shortly before her birthday, a friend of her father’s enters the kingdom and proclaims her parents’ will left a second choice—if Rosemarie can marry before the eve of her eighteenth year, she will be exempt from the ancient vow.
Before long, Rosemarie is presented with the three most handsome and brave knights in the land. But when the knights’ arrival results in a series of attacks within her land, she begins to wonder if the convent is the best place after all. If only one of the knights—the one who appears the most guilty—had not already captured her heart.
This story was a heart-stopping romance with danger and daring every step of the way.
Brought to you by Melanie Mason Author at 11:48 AM No comments:

Just a reminder to everyone about my book signing coming up on Saturday the 17th of October. 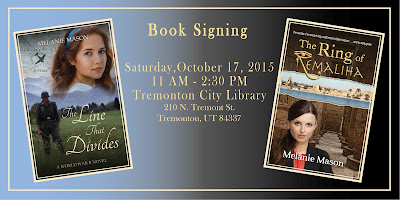 Brought to you by Melanie Mason Author at 8:56 AM No comments: 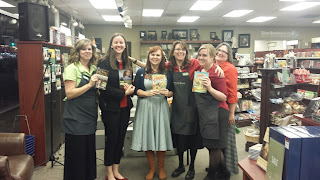 So I had the opportunity to participate in the Ladies Night at Deseret Book. What an amazing experience. I met all the gang at DB including Dawn Clark, the manager. What a wonderful group. They were so welcoming and excited and supportive. It was a ton of fun for me. If you missed out, hopefully you can come next time. 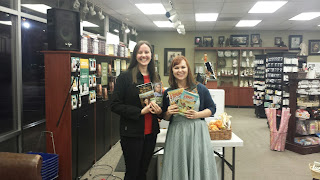 I also had the chance to meet and sit next to Heidi Schulz, author of New York Times bestseller Hooks Revenge. It was delightful to chat with such an accomplished author.

Overall this was an experience I won't forget!

Brought to you by Melanie Mason Author at 12:56 PM No comments:
Newer Posts Older Posts Home
Subscribe to: Posts (Atom)