Here is another book to check out.

When Trevor Willis offers Dani Carpenter a job as director of a new camp for children, she is thrilled. Dani intends to keep Trevor, a family friend and confirmed bachelor, at arm's length. But her heart changes toward him as they team up to protect Ady, the young daughter of a kidnapped scientist. After Trevor testifies against the son of Don Francisco Morales, a major supplier of heroin into the United States, Morales (aka the Scorpion) targets Trevor in a personal vendetta to destroy his reputation and then to destroy everyone Trevor loves. With Ady tucked away in a secure location, Dani and Trevor embark on a chase that takes them from the forests of the Pacific Northwest to the jungles of Mexico. They must stop the Scorpion before he strikes again.

This was an intriguing story. It was a little confusing and slow at the beginning, but then it picked up pace and got very exciting. It was nice to see the relationship between Trevor and Dani develop slowly instead of instant attraction. It was clean which is always a bonus. I was a little confused at the beginning with the whole suspense aspect because after the first bit we didn't hear anything else about it until the trial, then everything exploded into an action packed story that kept me turning pages until the very end.
Brought to you by Melanie Mason Author at 10:38 AM No comments: 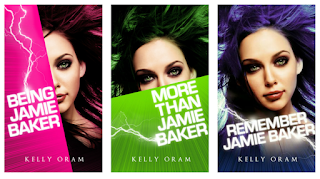 An accident that should end in tragedy instead gives seventeen-year-old Jamie Baker a slew of uncontrollable superhuman abilities. To keep her secret safe Jamie socially exiles herself, earning the title of Rocklin High’s resident ice queen. But during a supercharged encounter with star quarterback Ryan Miller she literally kisses anonymity goodbye. Now the annoyingly irresistible Ryan will stop at nothing to melt the heart of the ice queen and find out what makes her so special.Unfortunately, Ryan is not the only person on to her secret. Will Jamie learn to contain her unstable powers before being discovered by the media or turned into a government lab rat? More importantly, can she throw Ryan Miller off her trail before falling in love with him?
Brought to you by Melanie Mason Author at 1:00 PM No comments:
Newer Posts Older Posts Home
Subscribe to: Posts (Atom)